This encompasses a rich and diverse set of disciplines ranging from the study of planet formation and planetary systems, to comets, meteors, and asteroids, and the Earth's atmosphere. The Observatory at Elginfield as well as the radar site at Tavistock are used for the study of meteors, meteorites, bolides, and near-earth asteroids. 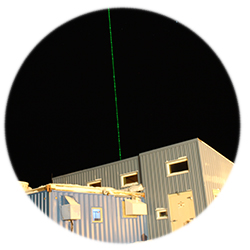 Also included is the study of our own Earth's atmosphere. Purple Crow Lidar is a laser radar (LIDAR) which operates from the Echo Base Observatory located at Western’s Environmental Science Field Station measures temperature and composition of atmosphere up to about 100 km altitude. At another local field station a CLOVAR radar is used to measure wind speed and temperature in the lower atmosphere. There is a similar UWO radar in operation at Resolute Bay (NWT). Other studies of the composition and dynamics of the middle atmosphere use satellite instrumentation. Theoretical studies are made of the nonlinear dynamics and plasma instabilities in the upper atmosphere. The space physics group makes theoretical and experimental studies of interplanetary dust and meteors.