Call for Applications for the Patrick Whippey Award

Awarded by the Department of Physics and Astronomy at Western University in conjunction with the Ontario Association of Physics Teachers (OAPT).

The Patrick Whippey Award for Science Outreach  is supported by the Department of Physics and Astronomy at Western in recognition of our esteemed colleague Prof. Patrick Whippey as a tribute to his devotion to science education and outreach across Ontario and Canada. It will be awarded to a teacher in Canada at the high school, college, or undergraduate level who has made a significant impact in science education outside of the classroom, with a focus on physics or astronomy. 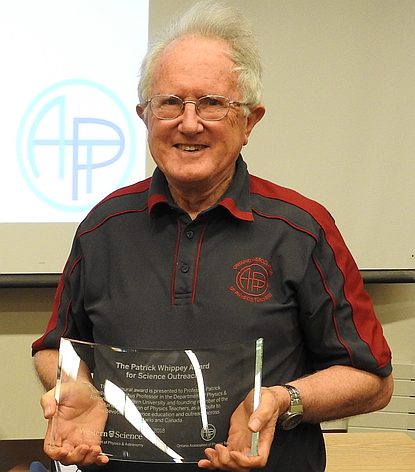 Biographical background :  Prof. Whippey is an Emeritus Professor in the Department of Physics & Astronomy at Western, where he taught for 45 years. He is well known for his commitment to and excellence in undergraduate physics teaching, as exemplified by the Edward G. Pleva Award of Excellence in Undergraduate Teaching (2005), the University Student Council’s Award for Excellence in Teaching, and his numerous appearances on the University Student Council Teaching Honour Roll at Western.

Prof. Whippey is also a founding member of the Ontario Association of Physics Teachers, for which he served as Webmaster, Vice-president (2003-2004), and President (2004-2005) and was honoured as a Lifetime Member in 2011.

Prof. Whippey is especially known across Canada in the physics and science education community for his incredible drive and initiative in organizing science outreach events, such as the annual Science & Engineering Fair and Science Olympics in London, Ontario, the Canada Wide Science Fair, the annual Team Canada selection for the  Intel  International  Science  & Engineering Fair, and numerous class visits to campus, to name just a few. The London Science Olympics alone has grown to approximately 1000 participants drawn from across Ontario.

Patrick’s passion for science outreach is an inspiration to many and has impacted thousands of students, teachers, and future scientists and engineers.

Webpage:  For information on the application process, visit the webpage:  https://oaopt.wildapricot.org/whippey-award/