from the original history by D.F. Gray

Located on the campus, this facility is used extensively for undergraduate laboratories and for the 'Public Night' and 'Exploring the Stars' programs.

It currently houses three telescopes on the same mounting: the original 25.4 cm refractor and small Schmidt camera as well as 30 cm reflector. When it was built by the Perkin-Elmer Corporation of New York, the glass objective lens of the 25.4 cm refracting telescope was one of the larger lens elements to have been manufactured in the western hemisphere at that time. The Perkin-Elmer corporation became a world-renowned scientific instrument company, having manufactured the mirror for the Hubble Space Telescope, and also having developed the gold film coating for astronaut Neil Armstrong's space helmet visor, to name just two of their many accomplishments.

On Friday, October 25th, 1940, a bright sunny day, this observatory and its 25-centimeter refractor were dedicated in a ceremony held in front of the new building. The observatory was presented by Mrs. Frances Amelia Labatt Cronyn in memory of her husband (Hume Blake Cronyn) who had considerable interest in science even though he worked in the financial world as general manager of the Huron & Erie Savings and Loan Company (later to become the Canada Trust Company), and president of the Mutual Life Insurance Company. Elected in 1917 as a Member of Parliament, he helped establish the National Research Institute of which he remained a member until his death in 1933. This remarkable gift to Western cost $40,000, a considerable sum in those days. The telescope itself cost $7,500.

And if you are a videophile you will want to know that the Hume Cronyn we enjoy as an actor, the one who married Jessica Tandy in 1942, is the fourth child of Hume Blake Cronyn. 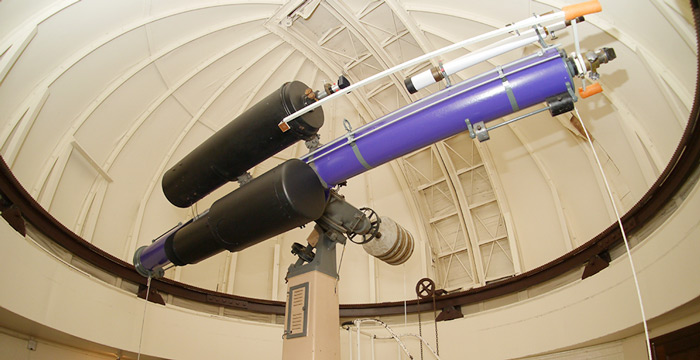